Over on G+, Mandy Moon suggested a barred owl, so here one is: 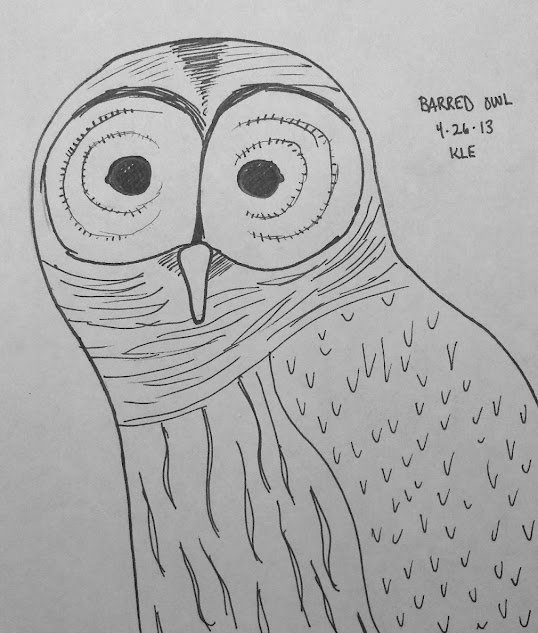 I suppose that means I take requests/suggestions!

Barred owls are the ones that say “who cooks for you?  Who cooks for you-all?”  If anyone ever mentions a barred owl in my presence, I will immediately say those things.
Speaking of birds saying things, the white-throated sparrow (they have a little dot of yellow over their beak) has a call that goes something like “poor, Sam, Peabody Peabody Peabody Peabody!”  (In Canada they say “oh sweet Canada Canada Canada Canada!”)  Of course they aren’t REALLY saying those things, that’s just a mnemonic device to help people (human people) remember how the song goes.  But it’s really hard for me to separate the two.  We get a regular number of white-throated sparrows in our yard, and they started singing a few weeks ago.  There’s one who sits in a bush just outside our bedroom window and sings in the morning.  I like it a lot.  I especially like it because he sounds drunk.  Really, it’s just that his song is a tiny bit off of what the “standard” is — he’s not actually doing it incorrectly (I don’t think, though what do I know, I’m not a female white-throated sparrow) and if the mnemonic weren’t English words I probably wouldn’t notice, but it IS, so it SOUNDS that way, and it cracks me up every freaking day.  I love you, drunk white-throated sparrow!

Last night I went to see The Best of Both Worlds in the theater with Mitch and his work-buddy Austin.  It was great hanging out with Mitch at a bar, and it was great to see TNG on the big screen once again.  I was sure that they would show the first half of the episode, and then some special features, and then the second half — but they didn’t!  Which just goes to show you that people should never say that they are sure of something because they might not be.

Instead they showed a little piece on the episode itself (which several times talked about how it was THE BEST CLIFFHANGER IN TEEVEE HISTORY, except oh wait we’re not going to present it like that; no great pause after “Mister Worf, fire!” and allofasudden Beverly has totally different hair but whatever) and then they showed the episode and then was everyone’s favorite (I’m quite sure it’s everyone’s favorite, I mean it is mine,) the blooper reel.  And then there was a commercial for Season 4 and then it was over.

The theater was much more packed than last time!  I figured it would be though, I mean BoBW is a “fan favorite.”  I think it is THE fan favorite actually.  But yeah, the place was almost totally full!  That made me happy.  Hooray for Star Trek fans!

That’s it I guess.  Oh but PS these are turning out to be less like owl doodles and more like owl sketches.  (By the way whenever I say “owl doodles” it makes me think of owl poop except that it can’t  because as I’m sure everyone knows, owls don’t poop.  They hock up big mouse loogies.  Actually I have no idea if all owls do that or just the most famous kind.)  That’s okay though, I’m just going to roll with it for now, at least I have done it for four whole owls!  I’m am historically not very good at sticking with that sort of thing so I’ll take what I can get.  From myself.  P.P.S. I need to use some heavier linework.

This is another one from my Hooters Calendar 2011 (August.)  I’m not sure what sort of owl he is, though. 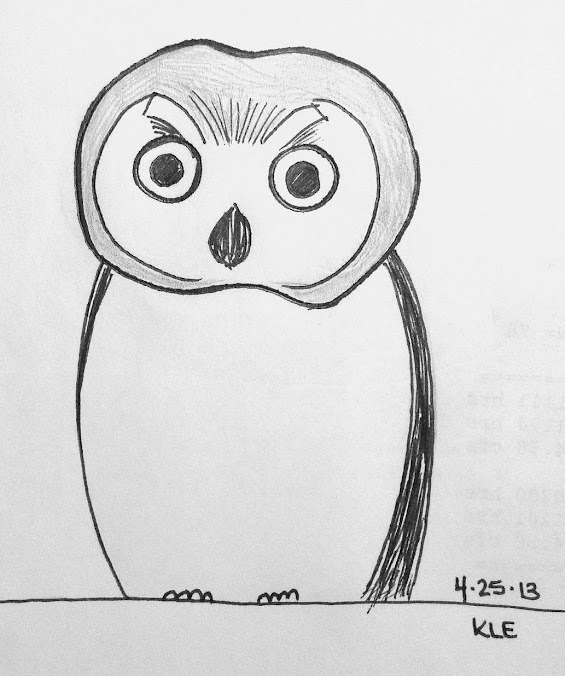 Besides the angry sort, that is.

Edited to add that this is a Northern Saw-Whet owl.

Haha, this is turning out to be harder than I thought!

Behold the snowy owl.  I tried to include more detail in earlier drafts but they all looked terrible so I stuck to the basics. 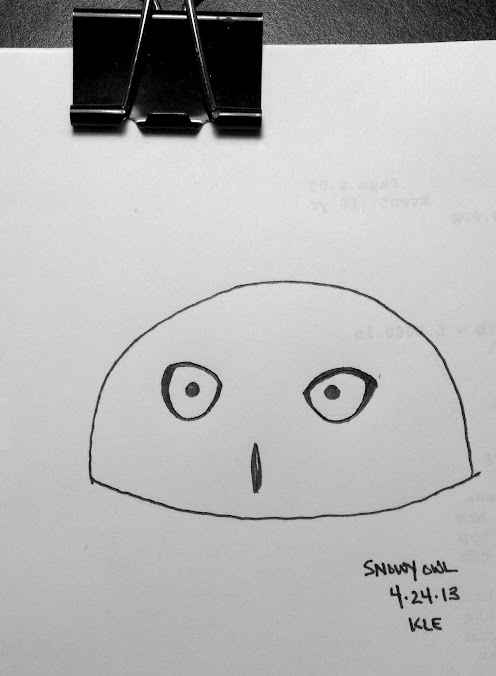 Yesterday I went to Collingswood to see a Mummers band perform.  They were good, but I was hoping they’d be a little more . . . modern.  Do some more familiar stuff.  It was still really nice though.  Lisa and Indiana and I went together, and we saw the Duffeys.  (Duffies?)

Indiana was great until she growled at a (n adorable) bull dog, and said bull dog’s companions got all up in arms about it, because I had just said that Indiana was super friendly and of course you can pet her!  She’s all growl (and only growlly towards dogs, never kids) but those people didn’t know that.  Ugh, I was slightly embarrassed.

Then I went home and worked on cleaning our office.  I was like “surely this is a one-evening project” but I spent 2.5 hours and all I did was organize our Important Documents.  I did completely empty a large plastic tub though, so that’s good I guess.  Recycled a whole armful of paper, and also shredded a bunch.  The goal is to clear out the office and set it up as a sewing room, just in time to sell the house.  Isn’t that always the way?

I have decided that one thing that I will do on this blog is post owl doodles.  By which I mean, tiny pictures of owls that I drew myself.

The thing that I doodle now (and have been doodling for almost twenty years) is just a . . . shape.   And it fits in with itself sort of well but not really.  And I’m really good at drawing them now, but who cares, right?  It’s just a dumb little three-lobed shape.

But if I spend the next twenty years drawing an owl, I’ll probably get pretty good at that eventually, and being good at doodling an owl is something that other people will be envious of.

Anyway I started two days ago and already missed a day.  Here’s the 4/22/2013 owl.  I drew him by looking at a photograph of a real owl.  (A Western screech owl.)  I think I’m going to try to do that for a while and develop my own style before looking at other stylized owls. 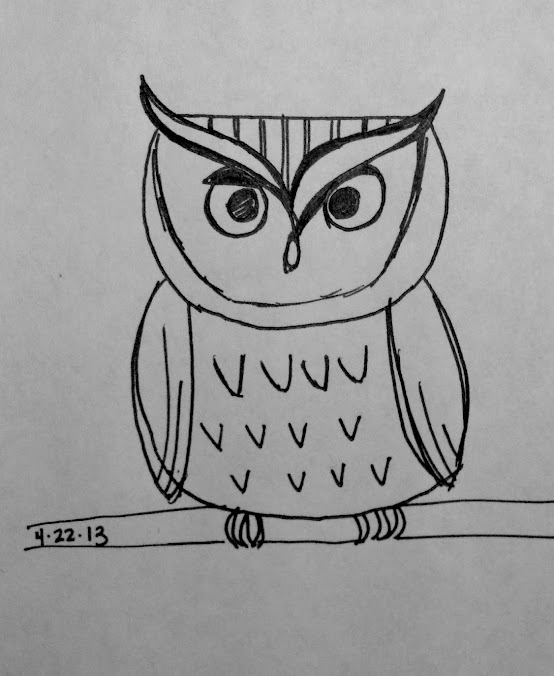 Today the bird on my bird-a-day calendar is a snowy owl, so I’ll draw him today.

I totally forgot that I even called dibs on this thing three years ago April 5, 2013

P.S. I included this photo of a tiny dog with a large moustache because it looks weird if I don’t have a photo attached to each post, I guess?  And this was a photo that was on my computer at work.  So take that.

Maybe if I spend too much time looking at photos of tiny dogs with large moustaches, they’ll fire me and I can spend all day on my blog.  Blog blog blog blog.

P.P.S. Somebody (chrome?  WordPress?) wants me to spell moustache without the “o!”  Balls on that.