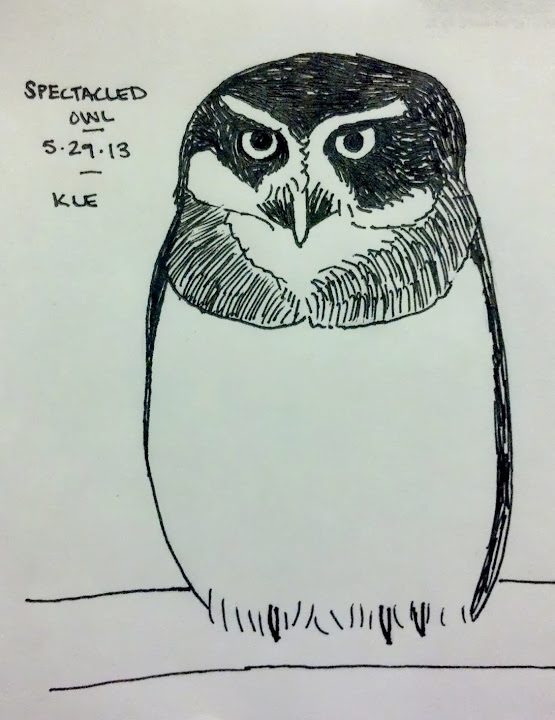 The juvenile spectacled owl looks like an adult one in reverse.  So that’s neat.

May was super busy, but now the busy parts are over:  Lisa and Curt are married; Chris is now thirty; and Jeff and Stephanie have returned to California.
Commence the freak-out about moving.  It has many layers.  Many layers of freaking out. 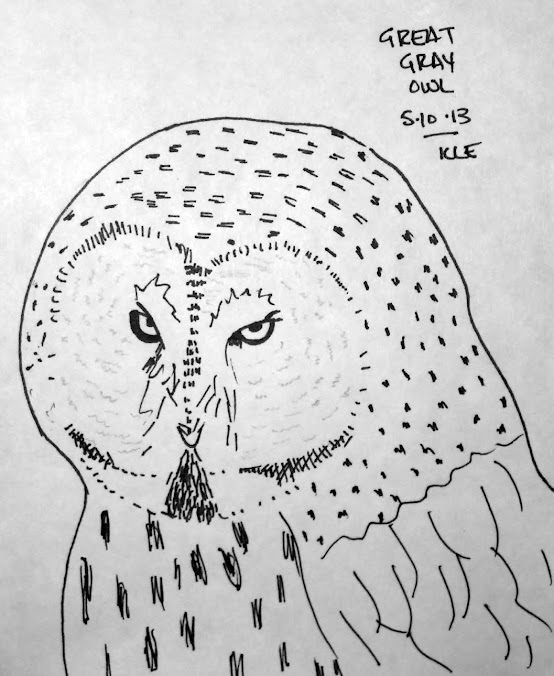 I only mention it because it’s such a Kerry thing to do.  Poor guy, I’m rubbing off on him in all the worst, dorkiest ways.

This is a Northern long-eared owl. 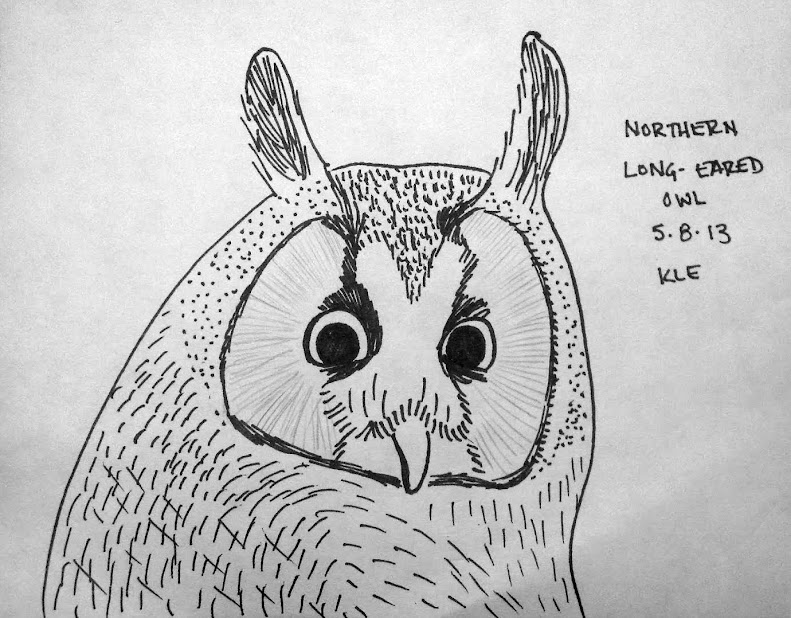 I like this one. He looks most realistic so far, of all my owls.  It’s because of all the hatching.  I don’t really have the patience for that sort of thing, though?  I remember back in the day I’d read Kris Dresen (Calamity Jon’s friend) and her comics had SO much cross-hatching in them, she said they would take forever.  Of course I’m also only working with two pens and a mechanical pencil, just office stuff.  So clearly I’m at a disadvantage, and anything I do is therefore extra-awesome.

On Monday I had sewing class, and I gathered my skirt and attached it to the bodice and even put the zipper in!  I didn’t think I’d get all that done, but I did.  Lots of ladies were doing gathering that evening, it was a gathering coincidence.  I’m hoping to finish the dress tomorrow (Friday,) and then on Sunday, which is Mother’s Day, Lynn & Ralph are going to come over but Lynn said she didn’t mind if I did sewing.  So I’ll work on my petticoat and chat with her.  We haven’t seen them since they left for Florida in . . . January or February.  It will be good to see them.

See, now I thought that I had real actual things to say, you know?  Something to talk about, not just a dry boring run-down of what I did this week.  But now it’s been too long and I can’t remember.  Boo.

I haven’t been very productive at work lately, and it’s a circular rotating trap.  But then on Tuesday I drew that owl and it made me feel like I had done something.  And I mean it only takes me like five or ten minutes, but I just felt . . . I dunno.  Something.  So I’m going to keep on drawing these owls.

My life is about to get super-crazy.  Lisa’s Bachelorette is this weekend, plus also Mother’s Day, Monday I have sewing class and Tuesday I have a (legit) planning board meeting and then on Wednesday Jeff and Steph arrive!  And then it’s busybusybusy for the month of May.  New Star Trek movie, the wedding, going up to Hawley (if my boss allows me the time off,) Chris’s birthday BBQ.  It will be so great to see Jeff again.  And I’ll have to try to squeeze my regular life in when they’re doing other things.  I sure do like that he/they will use our home as a home base, though.  It’s nice to just . . . sit around and hang out, sometimes.  Not just at parties.
I shall draw another owl today. 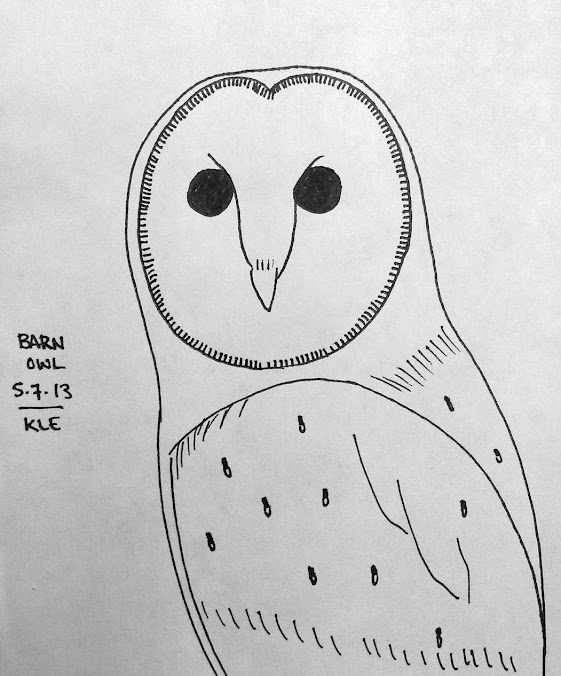 This the European eagle owl. 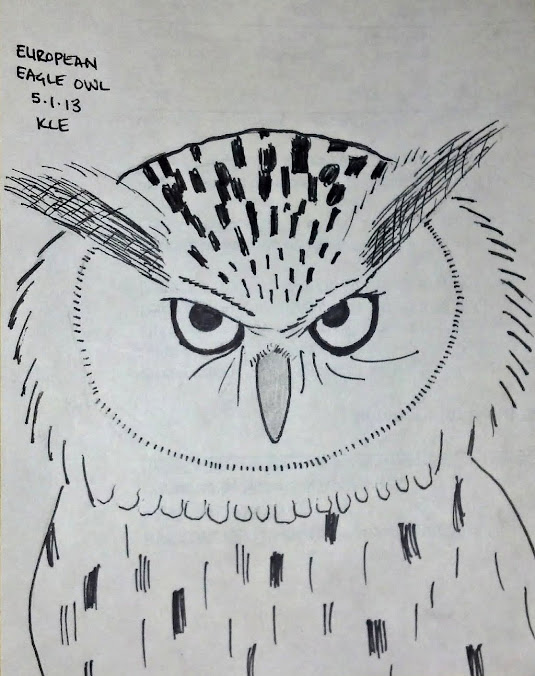 He’s a really cool-looking owl in real life.  Unfortunately, this picture doesn’t look anything like him.  Eh, whaddaya gonna do.

On Tuesday Chris and I took Indiana to the vet for her annual.  We didn’t both need to go, but I guess we wanted to go as a family or something.  She was pretty good.  She got to eat about a thousand treats.  She received compliments from the tech about how calm she is.  I wasn’t crazy about the tech (he took SO MANY tries to draw blood, and I was watching, and Indiana didn’t seem to mind/notice because Chris had treats in her face, but still, it was difficult to watch) but I adore our doctor, as I always have.  So if you need a vet in South Jersey, I recommend Dr. Chachkes at Winslow Animal Hospital.

After the vet and dinner I cleaned the inside of the fridge!  The whole thing!  I should probably do that more often than I do.  There wasn’t actually that much to throw out; it was mostly just taking everything out and cleaning the shelves and whatnot.  And I organized!  I put all the mustard together on the same little shelf, for example.  That won’t last very long, but was fun to do.  I like to be organized.

Chris fell asleep early on the couch (like, 9:30 or something) so I put on episodes of Project Runway that I need to catch up on.  Our DVR has been acting up lately but they were on On Demand!  We never go to that thing except for HBO so it’s nice to know that things are there.  Mad Men is there too which is good.  And it seems like they cut out most of the commercials — there were only two (2) commercial breaks in a 90 minute show, that’s pretty good.

Ugh that’s so boring to read about but whatever, it was exciting for me at the time.